Welcome to the Design Thinking 101 podcast! I’m Dawan Stanford, your host. Today I’m excited to speak with Rebecca Horton, a designer, coach, and long-time colleague and friend. In our conversation, we’ll talk about how to coach and lead design teams, some design thinking methods she has found valuable, and how design thinking and coaching converge.Rebecca has always been interested in design, but believed as she 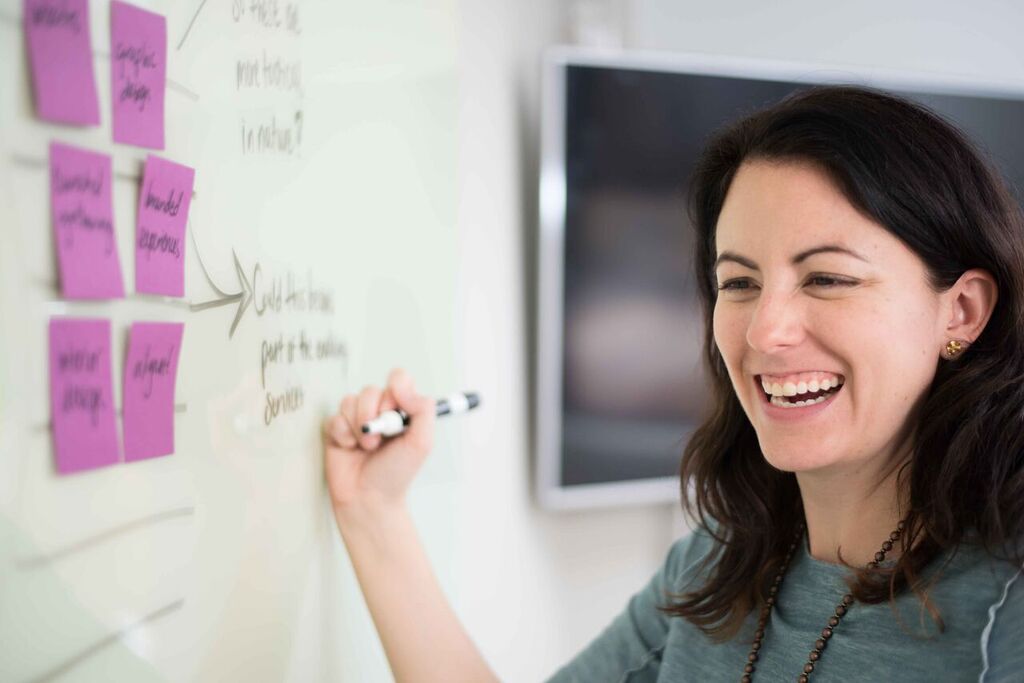 grew up that you had to pick a discipline within design (such as being an interior designer, graphic designer, or fashion designer). In her early teenage years, she was fascinated by fashion design, and was captivated by runway shows on TV. She later went to college for political science and public policy because it was practical and pragmatic, and picking a specific design discipline didn’t appeal to her.

After college, she discovered the design thinking field, which had the language to explain what she had been craving, and doesn’t force you to choose between disciplines. She returned to school, started her own practice, and worked in the corporate design world.

In our conversation, Rebecca will dig into a specific example of an instance in which things didn’t go according to plan, which ended up being exactly the turning point that made her work so successful. She’ll also explain how she was able to maneuver and adjust to create this positive outcome from unexpected circumstances, and explore the controversy surrounding customer personas.

As you listen, you’ll also hear powerful advice that you can apply to your own work and methods. For example, Rebecca advises clients to “welcome the stranger,” meaning that instead of telling someone unexpected to leave, invite them in and use the opportunity to understand why they might be there. Tune in to hear more about all of this, as well as Rebecca’s thoughts on blueprints, customer journey maps, and much more.

[01:11] Rebecca digs into how she got into design, what her early training was like, and how she got to where she is now.
[03:27] What have been some of the challenges or “aha!” moments that Rebecca has faced along her path so far?
[07:59] Rebecca talks about what ended up happening in the situation she has been describing, in which things didn’t end up going according to plan.
[11:22] What ended up happening as a result of what Rebecca has described is that the process became much more collaborative, she explains.
[15:25] We hear about the experiences that helped Rebecca get to a point where she was able to do the maneuvering, adjusting, and listening she has been describing?
[16:48] In co-creating with a student team or client team, what are some of the things that help them get past the initial hurdles with working with the design process?
[18:33] How would Rebecca describe how she approaches pulling together a set of tools that leads to solutions that stick or results that last in her work?
[24:23] Rebecca talks about some of the adaptations she’s had to make to using tools she learned as a student as she brings them into the world.
[27:38] We learn about Rebecca’s thoughts on customer personas.
[30:58] How would Rebecca differentiate her in-house experiences in using those tools from the experiences she’s had in her own consultancy?
[34:21] Rebecca discusses the resources and suggestions that she gives people who want to learn more about design thinking or how to bring it into their work.
[37:40] What are a couple of books that Rebecca would recommend? Her suggestions include The Design of Business, Moments of Impact, and The Power of TED*.
[40:19] Rebecca talks about how her experiences as a designer influence her as a coach.
[42:20] Where is Rebecca headed on her design journey?
[44:58] Rebecca talks about where people can find her to learn more about her and what she does.

Register
← A Designer's Pathway, Working with Clients, and Design Thinking DC with Arty Rivera - DT101 E7 Design Research, Clients as Design Evangelists, the Humanscale Reissue with Nathan Ritter — DT101 E9 →
We use cookies to provide you with better experiences and allow you to navigate our website.
By clicking “I ACCEPT”, you consent to our use of cookies in accordance with our Privacy and Terms and Conditions Policies.
I ACCEPT
Privacy & Cookies Policy