In this episode, I’m joined by Fred Leichter, the Founding Director of the Rick and Susan Sontag Center for Collaborative Creativity. We’ll talk about what Fred learned and led design during his 25-year career at Fidelity Investments, how he’s applying that experience at Claremont Colleges, and the promise and potential of human-centered design and design thinking in undergraduate education.In 1996, Fred worked on designing Fidelity’s first website, which was a 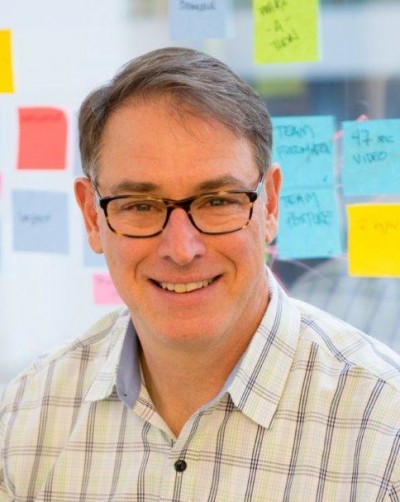 huge breakthrough in the industry. He was in the right place at the right time as the industry transformed, so he was able to see a major paradigm shift happening, and observed that design was at the center of it. In 2006, Fred discovered design thinking. From there, he took on a broader role as the chief experience officer at Fidelity, and used design thinking as the essence of what he did.

In a large organization, Fred explains, the natural organization is to use the existing silos within the business. This looks something like passing something from market research to product development to detailed design to specifications to technology to legal and compliance, and finally to production. As a result, it took a fair amount of work to get into a position to prototype products and services, and use manual workarounds before building the technology.

Fred will discuss how he approached building out the Hive, which started with trying to engage students at a progression of levels. At the first level, he ensured there was an invitation to make something with a variety of crafting materials. The next level up involved workshops around design thinking, empathetic listening, or making friends with everyone. At the next level, they started offering pop-up classes usually taught by faculty. Finally, they offer semester-long courses for credit.

Tune in to hear Fred talk about resisting the urge to rush to a solution by putting alternatives in front of the customer, why we should look at a project expecting to be wrong instead of expecting to be right, the convening that he hosted, the ways in which colleges and universities can be more rigid than large organizations, and much more.

[01:10] Fred talks about how he arrived at “the Hive,” or the Rick and Susan Sontag Center for Collaborative Creativity at the Claremont Colleges. He takes a moment to describe the schools and points out how highly ranked they are.
[07:01] What were some of the experience that helped Fred see and feel his love for teaching and design thinking?
[09:43] When Fred did the first design on Fidelity’s website, he didn’t call himself a designer, but he realized that he was interested in the topic and trained himself as a designer.
[12:02] Fred studied the unmet needs of people with aging parents and issues around intergenerational finance when he was at d.school.
[15:02] At the point Fred was describing, was he still using design workshops to help people internally understand and explore the concept?
[16:35] We hear about how Fred set up and built design teams.
[18:23] What tips would Fred offer to someone facing a similar challenge in a large organization?
[21:50] Fred talks about ways to resist the urge to rush to the solution. He also discusses whether he shifted the way people were rewarded organizationally for failing, finding things, and testing things.
[24:29] We learn about Fred’s move to the Hive, and why he felt like he would be crazy not to take the opportunity.
[28:28] Fred discusses his approach in building out the Hive, and the various levels offered to the students.
[33:17] Dawan invites Fred to talk about the convening that Dawan attended and Fred hosted.
[36:44] We hear two of the largest impacts that Dawan got from the convening that he and Fred have been discussing.
[40:53] Fred talks about how he sees roles in directing or leading design thinking evolving or changing over time.
[44:06] What are some of the resources for someone, particularly a student, interested in getting into design thinking?
[46:19] One of the best resources that Fred gives to students is a blank notebook and a pen.
[47:17] Where can people find out more about Fred and the Hive?

The Rick and Susan Sontag Center for Collaborative Creativity
Fred Leichter at Harvey Mudd College
Fred Leichter on LinkedIn
The Hive at the Claremont Colleges on Facebook
hive_5c on Instagram
Stanford d.school
Fidelity Labs
Doreen Lorenzo
Frog Design
Creative Confidence: Unleashing the Creative Potential Within Us All by Tom Kelley and David Kelley
Steal Like an Artist: 10 Things Nobody Told You About Being Creative by Austin Kleon
The Opposable Mind: How Successful Leaders Win Through Integrative Thinking by Roger L. Martin
Protobot
IDEO.org

Register
← Stakeholder-Centered Design, Design Thinking in Large Organizations, and Critique for Design Teams with Jean-Louis Racine — DT01 E3 Leading a Design Thinking Consultancy, Betting Small to Win Big, and Driving Business Growth with Design Thinking with Natalie Foley — DT101 E5 →
We use cookies to provide you with better experiences and allow you to navigate our website.
By clicking “I ACCEPT”, you consent to our use of cookies in accordance with our Privacy and Terms and Conditions Policies.
I ACCEPT
Privacy & Cookies Policy